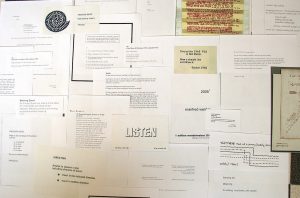 Walking from Scores is a collection of 65 non site-specific scores by artists, composers and collectives involving walking, listening and sound-making in urban space. Starting from a wider interest in the dynamics of sound and listening in the everyday sphere, the project focuses on verbal notation – conceived as a catalyst for action – in relationship with walking and moving – considered as a way to establish a dialectical relationship with the everyday and the context.

The title is a variation on Working from Scores, a text originally published in 1990 where Ken Friedman introduced his notion of “musicality” in visual art and intermedia, interrogating ideas of “authenticity”, “intention” and “meaning” and understanding the artwork as a set of instructions that allows a constellation of different interpretations. Embracing this open approach, the collection is reactivated in different ways through scattered and itinerant forms in close dialogue with each context.

The workshop is open to artists, musicians, performers, students and anyone wishing to explore from a post-disciplinary perspective the relationships between sound, listening and the everyday sphere, the potential of walking in urban space, as well as an expanded notion of notation. The program is organized in several theoretical and practical sessions focused on walking, on listening on the move and on itinerant performance. Participants are invited to re-enact the collection, to intervene in the (environmental, institutional, social…) context, to bring into play their body in space, to practice listening as relationship to others and the world, to engage in collective action, to reflect on the aesthetics and politics of sound in urban space… No musical or performative skill is required, but a collaborative and explorative attitude is necessary.