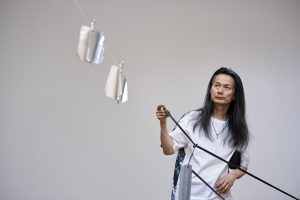 Aki Onda is a composer, performer, visual artist, and curator. Onda was born in Japan and resides in New York.

Aki Onda presents Radio Waves From Tangier, his new composition of tape recording collected in Marocco in 1988 and 2010 as a homage to William S. Burroughs, which is part of the Cassette Memories project, works compiled from a “sound diary” of field-recordings collected by using the cassette Walkman over a span of last three decades.